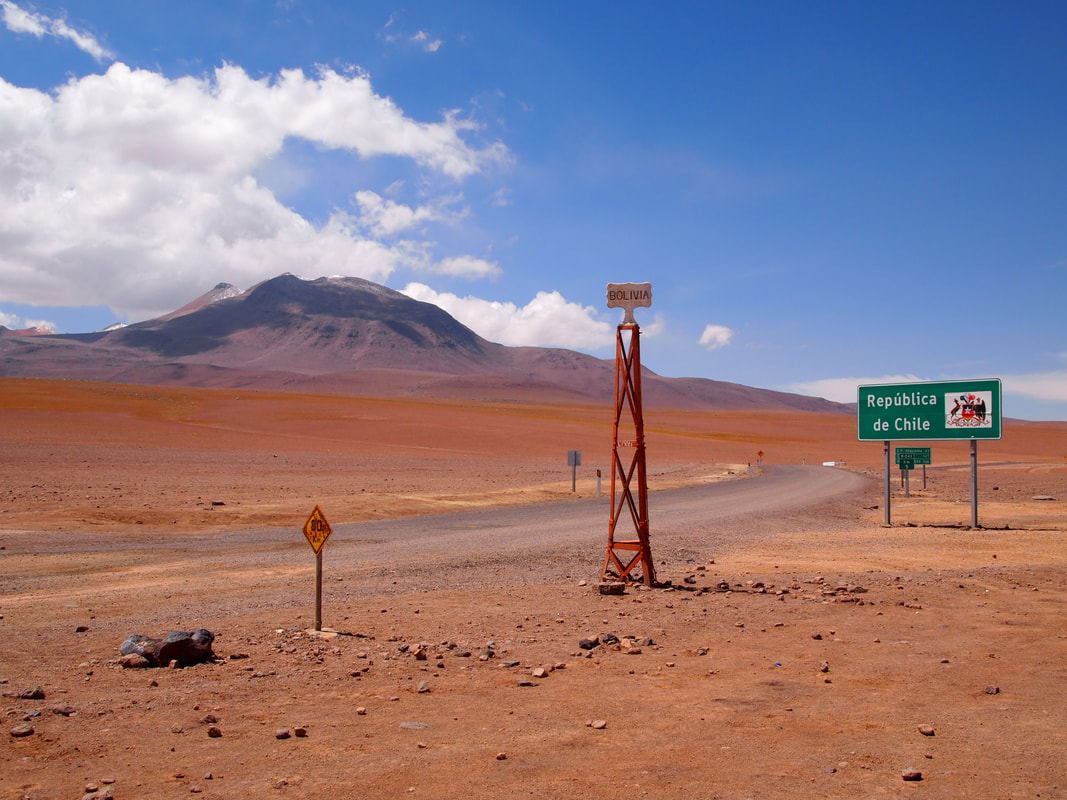 The journey was windier than I could have possibly imagined. The road leapt over mountainsides, through chalky gray rivers swirling with metallic reflections of the sky. Emblazoned, minted. As we traversed Sur Lipez, the water diminished, reminisces of the last rain gashed into the rivers edge. A drawbridge spanned sandpaper. Windowless mudhuts dotted the hillside. The only variance from the muted terra firma was the shimmer from the corrugated steel roofs and the darkness of an impending storm.

​Some were narrow passageways between rows of connected camel row-houses, where squatting old ladies retreated like turtles into their rainbow woolen ponchos. Tiled public squares freckled with energetic children wreaking havoc on a brood of hens. Teenagers lazied on abandoned metal sheets jutting from the ground burning holes with their universal bored stare.  ​Other villages were mere dots on a map, an analogy for the particles of dust that swept and stained everything – not a color besides blackening bananas in sight.

Eduardo Avaroa Andean Fauna National Reserve, 2019 A strange alagam of diligence, exertion and tedium extended everywhere. A fence marked by rocky cairns extended for a mile. Road hazards were recognizable by strewn rocks or metal abruptly positioned in a lane. Road maintenance was done by the hands of leathered, shrinking men in whose vests had nearly lost their reflective sheen. One man pushed, rolled, scooted a boulder across the nadir of a winding valley, valantly entrusting oncoming drivers to anticipate and react to sudden hazards in the road. On top of a snow-speckled mountain, the wind smacked like waves and we came to an abrupt stop. At each unsuspecting town or approachment to a random site of interest, there was always a kid and a man to pay. Their scattered system of tolls. Donde vas?

That was a good question. Where were we going? Yes, there was an itinerary that we had, places to be by the end of each day. Towns were supposedly our end destinations. The dusty, ragged frontier of Tupiza. It’s colors faded like an old shoe, all of its white yellowed, smelling of everything it’s been through. Sol de Manana, a town spaced between two smooth volcanoes whispering a bitter wind between the quiet streets. The gigantic palms of Villa Abecia shading the bodegas peddling mapley sweet wine, it’s streets echoing the crackle of parrillas and the squeaking of one little boy’s bike. But these were simply the cornerstones to the pocked dirt roads atop endless mountain-passes in the clouds.

Over the years, I have come to shun a constant travelers proverb. It seemed to emit from tongues like the greeting ‘How are you?’. Yet I found myself reflecting over the hundreds of miles/hours as I stared into the endless valleys, watching the shadows of the various peaks play out on the hillsides.

​No other expedition had the saying ‘It’s more about the journey than the destination’ been more applicable than that of Bolivia.

If you go (& you should), practicalities:

THE ROADS: If you want to be able to take in the scenery and get through the long distances each day without wanting to scream, I highly recommend hiring a driver.

THE CLIMATE: If you are planning to go during the rainy season, the Altiplano is where you want to be. The weather is likely to be stable and your journey relatively easy. Steer clear of La Paz & the Amazon. Samaipata and the Southeast will be a bit wet but not near as bad as La Paz.

And now, take in these spectacular snapshots from Bolivia: