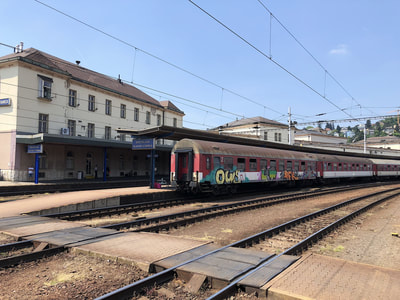 Circling the roundabout for the fifth time, my patience began to wane. The backpackers that I had seen walking from the bus stop on the main highway had almost made it to their destination. I knew were they were heading. The one hostel in town, the Ginger Monkey, where I had originally planned on staying but decided last minute against for seclusions sake. I cursed myself, if I had stayed there I would be drinking wine by now! Finally, I parked at the one restaurant and desperately waited for a passersby.

Two little old ladies, each draped in floral prints (red poppies and yellow daffodils), shuffled on their evening stroll up the solitary road with a panoramic view of the High Tatras to their right. I attempted my best Slovak pronunciation. An instant click of comprehension and she was off pointing and motioning. ‘Obviously it’s up that side gravel alley behind these abandoned buildings’, she implied.

Relieved, I pulled up to the lodge – reminiscent of a kitsch wooden lodge you’d find in the Appalachians, adorned with all types of multicolored windmills and objects. The owners were gathered inside talking loudly, inattentive to the tv that blared out the open doors. I excitedly put off dinner to share wine with a supposedly English-speaking Slovak. ‘What time does the restaurant close?’ He assured ‘10pm’. Since the options were abounding, I was hankering to get his local take on hikes. But, surprisingly, his were identical to the English blogs that I had read: ‘Zelené pleso’. Only when he repeated the directions to the trailhead did I realize what little English he spoke. At that minute, I dashed down to the restaurant.

The place was as dark as a medieval tavern, one obviously drunk couple remained, their heads swaying to & fro while they attempted to gaze in each others’ eyes. I begged for bread. The waitress replied that they only had frozen loaves. I could try the restaurant in the next town over – 20 minutes away. She must have seen the desperation in my eyes, she rushed back to the kitchen and returned with the drunk couples discarded bread basket. I was overjoyed.

I knew from the start that I was going on the wrong hike. None of the names matched up – not the chata, nor the medley of hikes stacked on the posts. But, I reasoned, I signed up for this hike. One I didn’t read about in countless blogs – it felt more adventurous, more mine.

Ahead, a Slovak man ferociously trekked through the forest with his poles swinging, it appearing to be his morning routine. The trail overlooked a stream rushing with winter’s water, sprouting wreaths of yellow flowers. I soon reached a chalet hunkered in the one nook the mountain had to offer. Every hike in Slovakia has a beer chalet waiting to reward you.

Nearly down, I ran into a shirtless man starring at the trail pole. ‘You are alone?’ Well, there is no denying it. We are in the middle of the woods.

I asked why he was so shocked. His frightening reply, ‘Sometimes it’s good, man and woman being alone. Sometimes not so good.’ Broken English can have wondrous implications.

It was a breezy hike that I decided was to be the warm up before Zelene pleso, I was craving more of a reward than beer. 5 minutes away was the unmistakable trailhead for Zelene pleso. Cars lined a dedicated parking area, a large wooden map showed the path. Along the way, several crews of men were constructing new bridges – pulling the timber from the forest, halving the logs and sawing them into place. Dust & shards of wood flying through the air, none of them sporting eyewear or protective gear of any kind. I passed a dipshit wearing a ‘Budafuckingpest’ shirt, one earphone dangling out of his ear. I wondered if the construction guys would give him a go on the saw.

// The trail wound through the lush, bright green forest and emerged in a col-de-sac of limestone peaks spotted with snow. The lake an emerald green, reflecting the surrounding foliage. A barrage of tourists had schlepped their photography gear up and were manically snapping photo after photo of the lake as the clouds rearranged its overhead lighting. I tried to sit in seclusion and reflect myself, but each time feet would find their way to me. I had to keep myself from snatching at their ankles.
​
After a dozen miles, the chalet was definitely calling me. I counted my euros, and realized the parking fee had dissolved my chances of beer. Defeated, I began to turn back when I heard a manly roar, ‘Colorado!’. It was the group of Slovak men I had seen hiking in the low Tatras a few days earlier. They summoned me over for beer and tripe-stomach soup.

If you go to Slovakia:

This blog is about Zelene Pleso but the real gem is Velky Rozutec.

The train is slow and the transfers many for outdoor adventuring. If you have limited time, rent a car.

– Stay in Štefanová and hike the Veľký Rozsutec loop (it is technical at the top). It is an amazing quaint town in the middle of Mala Fatra that has unlimited hikes. I could have stayed here for 5 days alone. I highly recommend Penzion Sagan.
– Make sure you pick up groceries & wine before heading into the High Tatras.
– Stay in the new building at Hotel Nad Przełomem in Sromowce Niżne, Poland. Kayak the Dunajec, hike Trzy Korony, you can bike along a river trail forever. Pieniny was amazingly underrated.