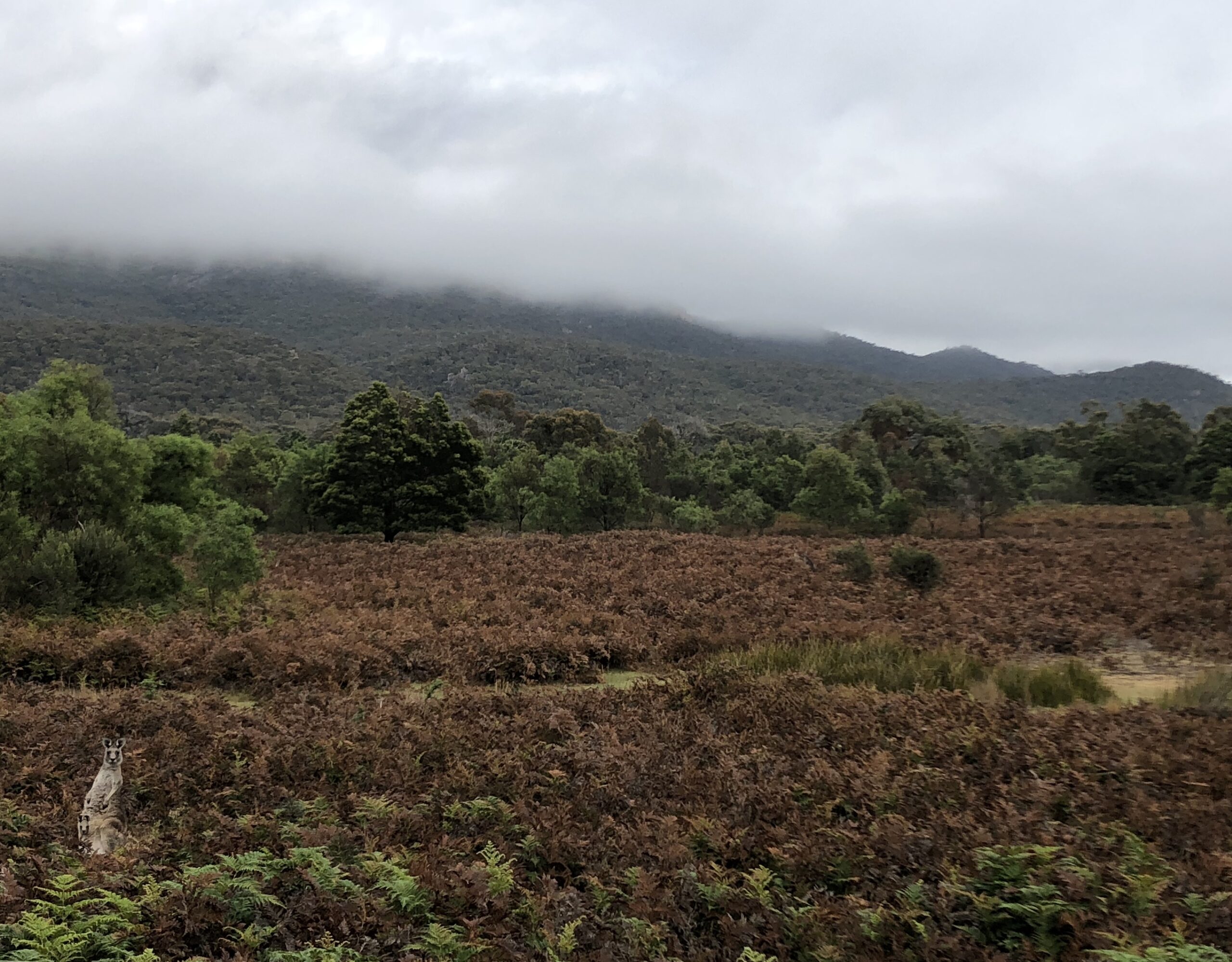 Green had never been such a complex yet vague idea. Seafoam, ivy, sage, spruce. Sharp needles, crosshatched blades, overhanging branches.  As I wound through the wild coastal grasses of the Great Ocean Trail, parts of the trail rode the ridge high, performing optical reveals when emerging from a burrowed, cored-out meadow’s nest.  The wind pushed and shoved in all manners of direction giving me a drunken gait as I ran.

​Glenaire-Melba Gully bellowed dark alleyways of green canopy, knotted branches of broomstick trees twisting into gray scribble atop a glistening meadow. I could have been a superhero who could brandish the wrath of a tornado by the looks of how many flies hived & swirled around my limbs as I dug along. At Princetown, 72” reeds shot out of the Gellibrand River like whiskers.

As the light diminished from the sky, the clouds vanished along with it. Filling its space was the whooshing of the tide – a deep, voluptuous breath during wintertime. The birds sung their glory bells, tapped their 80’s keyboard keys, clinked champagne glasses – tink, tink. One periodically gurgled in glory as if it was downing salt water with a raw throat. A faint mist began to set – smudging the tops of the eucalyptus.

I leapt out of the door at sunrise the next morning for more of the Great Ocean Trail and within a few minutes time I was sticker than a cinnamon bun. After breakfast, I angled down to the Glenaire Campgrounds where brambling red gum trees stacked neatly near the river’s shore. Coffee in hand, I wondered if the koalas would be obvious enough to spot. I surveyed for knappy balls of fur in the trees. After only a few minutes I spotted a pineyed furball coiled in a metronoming branch. The wind pulled the limbs for feet in either direction but this did not concern the marsupial from following my step and gaze.

// Up Binns Road was a slippery track through gargantuan beeches & ferns that put the palms of Santa Monica to shame. Beams of light emphasized the towering bohemeths. The road dropped down into a redwood forest with a suspicious lack of green underbelly – devoid of all but the carmelized needles that had piled year over year. A few steps away, a river scrambled over sharp green lichen and capsized timber that was gradually assuming a new shade of green. Lake Elizabeth sounds like a pleasant, convivial spot where one would picnic on crustless sandwiches while wearing straw hats. In actuality, it feels like a trapdoor into purgatory – dark, mysterious. An erie timelessness engrossed the area, recalling Midnight in the Garden of Good & Evil. Topless, dagger-like trees jutted from a murky lightless pond. Crawling ivy enmeshed with a mischievous purple flower seemed an innocuous highlight meant to distract.

As the story goes, Lake Elizabeth was created a century ago after a year when the rains never stopped. The water led to a mudslide, blocking off the waterflow and creating this mysterious home to the coy platypus.
​
A sign announced ‘beach’ at the banks of a sludgy, immobile green river surrounded by jagged rocks. The path led down to the banks of the whiskey colored water, shards of decapitated white beeches stood erect in the middle. Black cockatoos whistled in the trees, everything else was noticeably still. As soon as I had begun to let my guard down, and get used to this evil lair, I turned the corner and nearly stumbled into a gigantic black & red snake at my feet. I nervously turned on my heels to make my way out, cataloguing each branch and dutifully playing the game ‘snake or stick’? An echo emerged and the sound of the trees creaking like rusty hinges of wooden doors filled the void.

If you go, practicalities:
Coffee & eats:

Other places to check out: